I am so lucky.  All four of my hives are alive and thriving.

For the last eight months my bees have been left to their own bee-ish devices.  I’ve been too busy with Culinary School and professional cooking to mess with them.  I’m delighted they’ve been thriving despite my benign neglect.  I guess this happens when one lets one’s bees be bees…

A few years back when I was busy preparing for a big trial, my inattention resulted in the growth and development of what I fondly refer to as my “Mean Bee Hive”.  It’s the biggest, healthiest, and most productive hive I have! (Yes, they are a little defensive….) 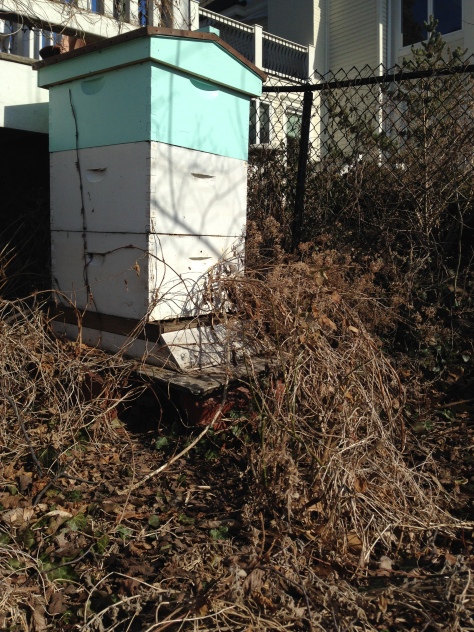 I still avoid messing with my Mean Bees.  I have no idea what’s going on in their lower deep, and I don’t want to know.  I suspect it’s some type of mystical and magical bee alchemy I wouldn’t understand.  I’m happy if they’re happy.

Notwithstanding the above, late winter/early spring is a precarious time for bees.  I’m going to make some Bee Fondant (Yes, that kind of Fondant!) tonight or tomorrow.

But here are a few pictures I took yesterday.  I wish these pictures showed how active my bees actually were!

Obviously, there is much cleaning and gardening to be done to pretty up the Apiary.  But right now, I’m delighted that everyone is surviving the winter!

Thanks to my readers for welcoming me back!  I’m glad you’re interested in hearing my tales of surviving Culinary School!

One of my friends/readers asked whether I thought my -er, ahem- apparent age was what caused my instructors to be initially somewhat dismissive.

Good question! While I’m sure my age had something to do with it, it was probably more the fact that I flounced in, bejeweled, carrying a giant Louis Vuitton bag, having virtually no idea what Culinary School actually entailed. I vaguely knew that cooking was somehow involved…

I think I was temporarily deranged by grief.  I’m glad I was even admitted. However, I do believe I wasn’t expected to last more than a few weeks.

Again, this wasn’t primarily because of my age. The dropout rate for Culinary School is astonishingly high. Our summer class of close to forty, which was already small because we were summer starters, was down to twelve by the semester’s end.

This wasn’t college like I remembered it.  The attendance requirements were non-negotiable.  You showed up for every class session on time, prepared, dressed in a clean uniform, and ready to work. If you didn’t satisfactorily complete online homework assignments beforehand, you weren’t permitted to attend class.  Two absences and you were out.  People dropped like flies.

My age and job experience ended up helping me. I’m used to showing up on time and working insane hours under less than favorable conditions. I must confess that I actually like it.

But let’s go back to the uniform for a minute.  Chef’s whites – the only garment less flattering than a bee suit!

I may look like the Pillsbury Dough Boy most of the time, but the uniform is comfortable and functional.  The deep pockets of my Chef’s pants have even replaced my big Louis purse!

Well, I’ve gone on and on, and could go one even longer, but I’ll save some for later.  Instead, I’ll share one of the first recipes we prepared in class:  Honey Poppy Seed Vinaigrette.  It’s fantastic on both fruit and greens, and it’s made with honey!

Briskly whisk all ingredients or shake in a small jar with a tightly fitting lid.

I’ve been AWOL for five months now.  My sincerest apologies to all who have tried to reach me without success.  The reason is singular – my complete immersion in Culinary School.

The good news:  my bees are flourishing!!  They’ve never been healthier!!  I’m not sure whether it’s because of the idyllic summer we’ve had in Ohio or the fact that I’ve left them alone to do their own bee thing.  Maybe it’s a combination of both. In any event, they’re in the best possible shape to enter the winter season.

The bad news:  my garden is a mess!  It’s amazing how quickly things will descend into rack and ruin if neglected for even a short period of time.  My neighbors have been incredibly tolerant and understanding.  Perhaps they understand that it’s more painful for me than it is for them!

I’ll give you a flavor of what the past months have been like for me. Then I’ll go back to posting about beekeeping, gardening and cooking with honey.  With some culinary anecdotes of course!

As some of you may know, I’ve been a corporate lawyer for many years.  About five years ago, I added “writer” and “consultant” to my list of job titles.

Probably because the best way to motivate me is to tell me I can’t do something.  I’ve always been that way.  It’s the reason I became a lawyer.

There were other factors too. I’ve always loved to cook.  I come from a family of great cooks, both self-taught and professionally trained.  I’m one of those people who owns hundreds of cookbooks and reads them for fun.

And then my best friend died unexpectedly in April.  I was devastated. I was desperate to find something to get myself out of my head and distract me from my grief.

In any event, shortly before the summer semester started in May, I found myself enrolling in Culinary School.

In truth, I didn’t know whether I just wanted to take a few classes or do something more.  I figured taking cooking classes would be fun, keep me busy, and would help me with my writing.  Beyond that, I was clueless.

The Administration tactfully suggested that I might not be willing or able to handle the six hour cooking labs and other requirements of the program.  That’s when my motivation kicked in.  I immediately became sure I wanted to pursue a Culinary Arts Degree.  Hey, I might even get a Pastry Arts Degree while I was at it!

The first three weeks of school took their physical toll on me, big time.  I was in good shape when I started, but I wasn’t used to being on my feet cooking for five or six hours at a pop.  I hurt all over.  I started carrying a plastic baggie full of Advil around in the pocket of my chefs’ pants.

And then there was my age. I was older than everyone, including my instructors.  My fellow students avoided me, and I was frequently mistaken for a faculty member. 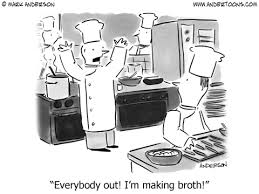 Then, around week four, something happened.  I got used to being on my feet for so long. I realized I was really good at professional level cooking.  I stopped caring what people thought of me.  I looked forward to my classes.  I began to think the whole Culinary School thing might work out for me after all!

One thing I never doubted was what type of food I wanted to cook.  I wanted to prepare glorious, adventurous food made from fresh local and seasonal ingredients.  That meant working at an independently owned, fine dining restaurant. 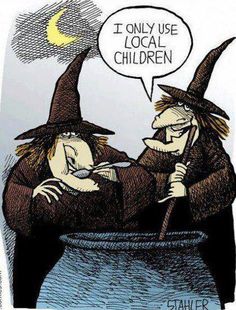 In Cincinnati, there are many exciting new fine dining restaurants in the Over the Rhine area downtown.  In June, I was lucky to find an apprentice position in one of them.  Thus began my true journey…

That’s enough for tonight, I think.  I hope I’ve left you anxious to hear more!!

I’ve missed you all, and hope you’ve missed me a little too.

This is a very popular post and many of you have requested seeds this year. I’ve restocked and will be happy to fill any and all orders!!

Okay, I’ve accepted that all of you aren’t going to become beekeepers, despite my best efforts to persuade you to don a beesuit and pick up a smoker and a hive tool.

Some of you are allergic.  Some of you just can’t understand how I can enjoy playing with critters that sometimes sting me. Beekeeping isn’t  for everyone, and that’s okay.

So is there anything you can do to help save the bees? Absolutely!

As most of you know, bees collect nectar and pollen from plants for food. They make honey from the nectar. Pollen is their sole protein source (honey bees are vegetarians) and they use it to make food for their young.

Gardening writer and TV presenter Alys Fowler is offering British gardeners top tips to help our bees, as part of Friends of the Earth’s Bee Cause campaign to save vital bees that pollinate our food and make our countryside, parks and gardens thrive.

Gardeners are also being asked to help urge the Government to strengthen its plans to protect Briatain’s bee populations.

More than 20 UK bee species are already extinct and a quarter of those remaining are at risk – due mainly to their food and nesting sites disappearing, with 97% of wildflower meadows gone in the last 60 years.

Gardens are becoming one of the most important refuges for Britain’s wild and honey bees, providing chemical-free food, clean water and a place to nest.

The Government must strengthen its plan to protect bees and other pollinators – but gardeners have a key role to play too.

Taking steps to make your garden bee-friendly brings in other beneficial insects and wildlife too, helping your garden to find its natural balance. When the balance is right, there is no such thing as a pest problem, meaning less work for you.

In return, bees will pollinate your fruits and vegetables, giving you more strawberries, apples and tomatoes to enjoy.

Green-fingered gardeners are usually green-minded too, so we hope they’ll help safeguard crucial pollinators by making their gardens bee-friendly

Friends of the Earth is also urging gardeners to avoid pesticides and peat. There are many excellent peat-free alternatives to avoid the destruction of peat bogs, which are important wildlife sites that absorb carbon pollution and reduce flood risk.

Gardeners are also being urged to sign a petition calling for the Government’s plan to reverse bee decline – the draft National Pollinator Strategy – to be considerably strengthened to tackle all the threats bees face, especially from intensive farming and pesticides: www.foe.co.uk/beespetition.

Bats Are Pollinators Too!

I fell in LOVE with the cover of Martha’s Easter Issue. I was positively obsessed!! 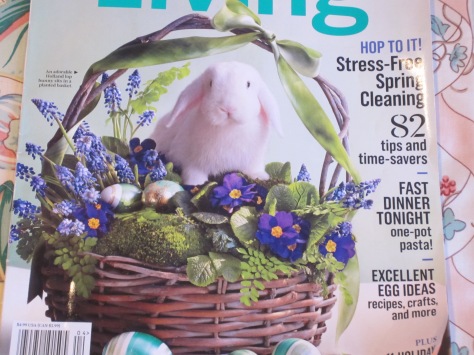 So, with my characteristic over-enthusiasm, I decided to recreate Her basket for my daughter’s in-law’s Easter Table. That won’t be too hard, I told myself.

Around two hundred dollars’ worth of Martha Products later, I have a reasonable facsimile of Her Easter basket, if I do say so myself. Minus the adorable lop-eared bunny, of course! 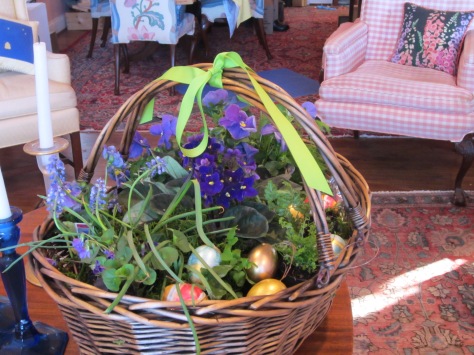 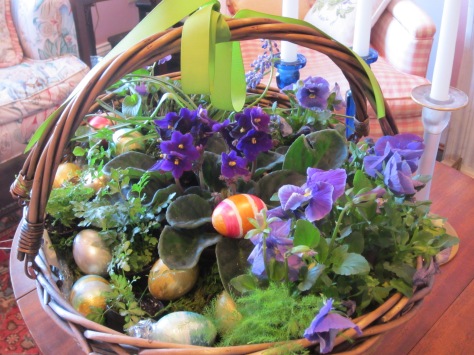 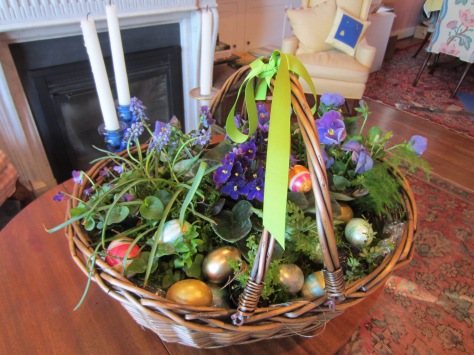 Martha may not have a warm and fuzzy personality, but She’s still one of my Pantheon of Women Goddesses. Hey, Athena wasn’t Miss Congeniality either! And who else could have had a bunch of federal prison inmates crafting?? To gild the lily, She’s an avid beekeeper too!!

She’s the tops in my book.

Have a wonderful Easter, Martha.  I was just kidding You in the title of my post.  🙂