The traditional symbolic flower of Italy is the rose, and one of the most beautiful Italian roses is the Rosa Variegata di Bologna. It is a Bourbon rose, originally bred in Italy by Bonfiglioli & Son in 1909.

The variegated blooms are lovely with their peppermint-like shades of white and pale pink-purple stripes.

The repeat blooming flowers are double and appear in clusters. They are exceptionally fragrant, even for a Bourbon rose.

The foilage is plentiful and very attractive. Since the plant is tall and has arching canes, it’s best grown and trained as a climber, a great small climber actually. It can easily be trained on an open wrought iron fence like in the picture below. 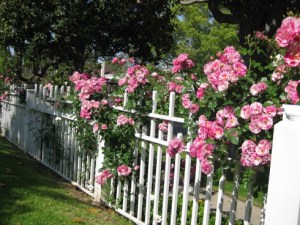 This rose probably won’t give you a good flower show the first season, so don’t be alarmed if you have little or no flowering the first year.

It will make up for it later. Most of the old roses that climb don’t produce a lot of flowers the first season. They need time to grow flowering canes and flower mostly from old wood from previous year, so do not prune for a while, or you won’t have any flowers at all.