This is a reblog from last year. Just in time for Bee Season!

The secret of lighting a bee hive smoker is burlap. Who knew? 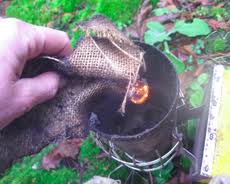 When I first started beekeeping, I learned that you lit a smoker using a layer of newspaper, some twigs and some fuel such as baling twine or dry leaves.

First you light the newspaper, then add the twigs. After the twigs are on fire, you add the fuel, which catches on fire and makes the smoke.

Sounds easy, right? It wasn’t for me. I could never keep my smoker going for more than 10 or 15 minutes.

Then I found a post written by Karen Edmundson Bean of the Brookfield Farm Bees & Honey Blog.  She had the same problem. I wasn’t alone!

Karen learned from a fellow beekeeper that the secret to keeping a smoker lit is using burlap. That’s pretty much it!  No newspaper, no twigs. Just burlap.  For the details, see Karen’s post.

Commenters agreed with this advice:

I do a similar thing, but I just light the burlap directly (I get it from the local coffee roasters), get it going well, then stuff it down in there, give it a few more puffs, then add a handful of freshly pulled green grass on top. I’m told this makes the smoke cooler. Hasn’t failed on me yet ..

I use burlap in my smoker, because it’s cheap and easy, and stays lit for a long time. The key to getting it started is lighting it outside of the smoker and letting it burn for a little bit until there’s a large flame. I usually fold the burlap up loosely, and leave a little thin corner out to start the flame on. Once that corner is lit, turn the burlap so the flame is at the bottom, then put the whole mass into the smoker. Don’t force it all the way to the bottom of the smoker, because the flame almost definitely will go out, even if it acts like it won’t. I pump the bellows a few times, slowly, to get the flame really going. Once thick smoke starts coming out of the top, you can push the burlap a little farther down (do this on one side, not in the center, so the burlap gets a little more spread out) and then close the lid. I’d recommend a long stick or a pencil to shove the burlap down.
It takes a few tries before you figure it out, and even then, sometimes it just goes out. If you forget about it while your working and don’t pump it every so often, it’s very likely to go out. I’ve found this out the hard way dozens of times. For multiple hives you’ll definitely want to have multiple bunches of burlap ready for use. When I did my split I used one clump for the first hive, and then added the second clump before moving on. I had more smoke than I needed the whole time, and it kept the bees calmer as a result. The smoker was going so well that I rarely had to worry about it, because it was angled so that wind was constantly blowing in from the back and pushing the smoke over the hives/ through the clouds of bees. Working with the wind is an important thing!

So now I know the secret of successfully lighting a bee hive smoker!  I hope this helps some other beekeepers out there as well!