“Musée des Beaux Arts” (French for “Museum of Fine Arts”) is a poem by W. H. Auden from 1938. The poem’s title derives from the Musées Royaux des Beaux-Arts de Belgique in Brussels which contains the painting Landscape with the Fall of Icarus, thought until recently to be by Pieter Brueghel the Elder,though still believed to be based on a lost original of his.

The painting portrays several men and a ship peacefully performing daily activities in a charming landscape. While this occurs, Icarus is visible in the bottom right hand corner of the picture, his legs splayed at absurd angles, drowning in the water.

The allusions in the first part of the poem to a “miraculous birth” and a “dreadful martyrdom” refer obliquely to Christianity, the subject of other paintings by Breughel in the museum that the poem evokes, “The Census at Bethlehem” and “The Massacre of the Innocents”. The “forsaken cry” of Icarus alludes to Christ crying out on the cross, “My God, why hast thou forsaken me?”

The Census at Bethlehem

About suffering they were never wrong,

The old Masters: how well they understood

Its human position: how it takes place

While someone else is eating or opening a window or just walking dully along;

How, when the aged are reverently, passionately waiting

For the miraculous birth, there always must be

Children who did not specially want it to happen, skating

On a pond at the edge of the wood: 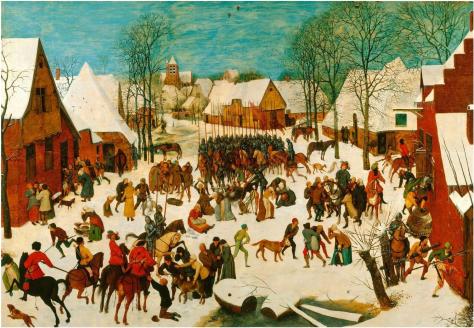 Massacre of the Innocents

That even the dreadful martyrdom must run its course

Anyhow in a corner, some untidy spot

Scratches its innocent behind on a tree.

The Fall of Icarus

In Breughel’s Icarus, for instance: how everything turns away

Quite leisurely from the disaster; the ploughman may

Have heard the splash, the forsaken cry,

But for him it was not an important failure; the sun shone

Water, and the expensive delicate ship that must have seen

Something amazing, a boy falling out of the sky,

Had somewhere to get to and sailed calmly on.