I was in Chicago this past weekend and had dinner at the delightful French Bistro Aquitaine. We began with two of their lovely specialty cocktails — I had the Blueberry Lavender Martini made with honey. It was fabulous!

Here is my recreation…

In a martini shaker add the ice, vodka, lemon juice, honey lavender syrup, and muddled blueberries and place top on shaker. Shake until well blended. Pour the drink into the glasses through a strainer, and serve!

Heat water until boiling, remove from heat and whisk in honey and lavender, until honey is dissolved. Chill well before using in drinks.

The pomegranate has been used throughout history and in almost every religion as a symbol of humanity’s most fundamental beliefs and desires, including life and death, rebirth and eternal life, fertility and marriage, abundance and prosperity. Almost every aspect of the pomegranate has come to symbolize something . . . its shape, color, seeds, juice.

Add vodka, lemon juice, pomegranate juice, and honey to a cocktail shaker with ice. Shake and strain into a short or highball glass with ice. Garnish with an orange wedge. Drink up and repeat!

Have you ever noticed how many mixed drinks contain cranberry juice? Why is that, I wondered?

The answer was easy to find. Cranberry juice is unique in that it can can be paired with a variety of flavors and will nearly always taste great.

In many mixed drinks cranberry juice is used to finish off a drink or to give it that “something special”. Cranberry juice’s sweet and tart flavor pairs well with practically any type of alcohol including vodka, gin, bourbon, rum and tequila. It even enhances the flavor of Champagne!

In addition to the drinks below, there is cranberry juice in The Samhain and also in The Bee-tini, which you can find in Cooking With Honey. 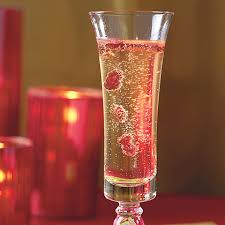 In a chilled Champagne flute add cranberry juice, honey and a squeeze of lime. Stir gently until honey is blended in.  Top off the glass with Champagne. Garnish with 3 or 4 cranberries.

In a medium bowl, stir together the cranberry juice concentrate, honey, lemon juice, lemon-lime soda and bourbon. Cover and freeze overnight. It will remain slushy because of the bourbon. Scoop spoonfuls into small glasses to serve as a cocktail.

Cranberries are quintessentially American. With the elections today and Thanksgiving coming up, it’s the perfect time to have a Cranberry Week on Romancing the Bee!

Native Americans used the cranberries as a staple as early as 1550. They ate cranberries fresh, ground, or mashed with cornmeal and baked it into bread. They also mixed berries with wild game and melted fat to form pemmican, a survival ration for the winter months. Honey was used to sweeten the berry’s tangy flavor.

By 1620 Pilgrims learned how to use cranberries from the Native Americans. There are several theories of how the berry was named. German and Dutch settlers named the berry “crane-berry” because it appeared to be the favorite food of cranes or the blossom resembles the head and neck of an English crane. Eventually craneberry was shortened to cranberry. By 1683 cranberry juice was made by the settlers.

The health benefits of cranberries rival those of honey. Cranberries have vitamin C and fiber, and are only 45 calories per cup. In disease-fighting antioxidants, cranberries outrank nearly every fruit and vegetable–including strawberries, spinach, broccoli, red grapes, apples, raspberries, and cherries.

So let’s celebrate Cranberry Week by baking some Honey Cranberry Cosmo Cupcakes!  To your health!!

To make the cupcakes: Preheat the oven to 350 degrees. Line a muffin pan with cupcake liners.

In a medium bowl, combine the flour, baking powder, baking soda, and salt; set aside.

In a large bowl, or the bowl of a standing mixer, cream the butter and honey together until light and fluffy, at least five minutes. Beat in the eggs, one at a tim, then stir in the lime and orange zests. Add the cranberry juice, lime juice, triple sec and vanilla, and stir until combined.

Place 3 tablespoons of batter in each cupcake liner and bake for 17 to 20 minutes, or until a toothpick inserted in the center comes out clean. Allow to cool completely before frosting.

To make the frosting: In a large bowl, or the bowl of a standing mixer, beat the butter for about 30 seconds. Beat in the sugar and salt until combined. Add the cranberry, vodka, lime juice, and triple sec and whisk on high for at least 5 minutes, until light and fluffy. If the frosting is too thick, add some of the milk, 1/2 teaspoon at a time, until desired consistency is reached.

Stir in food coloring, if using. Garnish with a slice of lime.

The ancient Celtic calendar follows the agricultural year more closely than our modern calendar. This is especially true for the beekeeper.

It “officially” becomes Winter on December 21st by the standard Western calendar, but in the ancient Celtic calendar, it begins a lot earlier.  On November 1st, Celtic winter begins with  the season of  Samhain (pronounced SOW-in).  The beginning of Samhain is traditionally celebrated on October 31st.

The Celtic seasons  are:

Why does the Celtic Winter start so early?

For beekeepers, it means that the queen stops laying and the bees go into their winter cluster with the queen always at the center, huddling together for warmth until Imbolc arrives in February and the queen again becomes active.

For most “believers”, Samhain,  means “End of Summer”, and is the third and final Harvest. The dark winter half of the year commences on this day.

October 31st is one of the two “spirit-nights” each year, the other being Beltain. It is a magical interval when the mundane laws of time and space are temporarily suspended, and the Thin Veil between the worlds is lifted. Communicating with ancestors and departed loved ones is easy at this time, for they journey through this world on their way to the Summerlands.

This was the time that the cattle and other livestock were slaughtered for eating in the ensuing winter months. Any crops still in the field on Samhain were considered taboo, and left as offerings to the Nature spirits.

Bonfires were built, (originally called bone-fires, for after feasting, the bones were thrown in the fire as offerings for healthy and plentiful livestock in the New Year) and stones were marked with peoples names. Then they were thrown into the fire, to be retrieved in the morning.

The condition of the retrieved stone foretold of that person’s fortune in the coming year. Hearth fires were also lit from the village bonfire to ensure unity, and the ashes were spread over the harvested fields to protect and bless the land.

Celebrate the Lifting of the Veil with a Samhain Cocktail.

Mix together in a shaker with ice and strain into a martini glass. Garnish with a cranberry.