It’s the end of Cranberry Week.  Only one more recipe after this one.  But the important thing is to remember to: 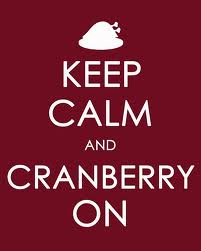 Preheat oven to 350°.
Cook potatoes until tender and drain; peel and cut into 1/2-inch thick slices. Arrange slices in a baking dish. In a saucepan, mix cranberry sauce, water, honey, orange rind, and cinnamon. Simmer, uncovered, for 5 minutes. Add butter; stir until butter is melted. Pour cranberry mixture over potatoes, then bake, uncovered, for 20 minutes, or until glazed and hot.

Did you know that cranberries have an anti-aging ability to protect brain cells from free radical damage and the subsequent motor and cognitive function losses?

Spoon 2 tablespoons of cranberry sauce into each of 8 (4-ounce) ramekins.

Preheat the oven to 325 degrees. In a small saucepan, combine the half-and half, vanilla bean, and vanilla extract. Heat over medium heat just until scalded; do not allow the mixture to boil.

Fill a large bowl with water and add ice. In a medium mixing bowl, combine the egg, egg yolks, and honey and mix. Gradually stir in the scalded half-and-half mixture and place the smaller bowl in the bowl of ice water to cool completely. Stir in the heavy cream and top equally the cranberry prepped ramekins. Place in a baking dish just large enough to hold them and add enough hot water to the pan to come halfway up the sides of the ramekins. Cover the baking dish tightly with foil and bake until the custard is set but still quivers in the center, about 35 minutes. Remove the ramekins from the water and refrigerate to cool completely.

Preheat the broiler, if using. Sprinkle 1 tablespoon of the sugar on top of each custard, spread over the surface, and tap out any excess. Place the ramekins on a broiling tray and broil until the top is melted and caramelized, about 30 seconds. Watch carefully; the sugar can burn easily. If using a torch (see Tip), pass the flame about 2 inches over the surface of the custards until the sugar is completely caramelized. Serve while the sugar is still warm.

* If using a torch, replace the superfine sugar with raw sugar, which caramelizes more successfully under a torch flame.